PROJECT: House of the Weimar Republic

Planning as of January 2018

Project planning is currently in Work Phase 3. This work status was presented in the City Council’s construction and environment committee at the start of January 2018.
The current focus is on the foundation of the extension building. A team of planning specialists including building site experts, structural engineers, and inspection engineers is at work, examining the extent to which various foundation options are feasible.
Ten trees must be removed to prepare for the construction of the extension building. Most of them grew naturally next to the remains of the former armory and could cause the rest of this structure to fall. Taking into account environmental protection requirements, the trees are to be removed by 28 February 2018.
Architecture firm Muffler’s design has a simple and clear plan: to overhaul the already existing building and to add on a modern extension.
The current building (Bauhaus-Museum) will undergo the necessary maintenance and renovation work (electrical facilities, burglar and hazard alarms, partial ventilation). The foyer, museum shop, and cloakroom will lead visitors into the building and make accessible the large room that will harbor a permanent exhibition. The basement will be left as is as much as possible and serve as storage room. It will also accommodate technical installations.
A light-weight joint between the current and new buildings will connect all floors of the House via a staircase equipped with a handicap-accessible elevator.
The extension building is to have a compact volume and an optimized and structurally lowered surface-area-to-volume ratio. It architectural outfitting shall correspond to the minimum standards. Parts of the structural shell will be built on the historical walls of the remains of the armory, forming a fascinating blend of old and new, past and future.
The building will have three areas, each one corresponding to its use. The garden floor’s multi-purpose room will serve as a forum for educational events on political affairs and debates. It is to be transparent and to open on all sides. A closed courtyard within the armory ruins shall form a calm outdoors area separated from the public area with the walls of the original building. The former armory’s plinth walls, protected as a landmarked site, will form the heart of the garden area, granting access to a large space on the ground floor for special exhibitions. This space shall offer flexibility and various options for organizing its use by rearranging furniture or partitions. Thanks to the connecting structure, it will be possible to use both exhibition areas (in the old and new buildings) in combination to create staggered mezzanines. The top floor will provide space for research purposes. There will be offices, meeting areas, and a small library to be used flexibly.
Armory - Playground
The playground is an important part of the town Center and is to retain its function. However, it must be used for the building site facilities during the construction of the House. Due to the very limited space available in the neighborhood, this is the only way to set up the construction site, logistically. The playground is to be restored after the new building is finished. Plans for this are in very early stages. The playground next to the new House of the Weimar Republic in the illustration above serves only to present the winning design. It does not indicate the current state of planning regarding the playground. In fact, further planning also envisions the participation of children and young people. The old trees in the construction area are also to be preserved as much as possible, with their substantial influence on the neighborhood’s micro-climate and appearance and, beyond this, their importance for the town center.
Schedule
(Developments and conditions at the construction site may require adjustments.):
February 2018: Project planning
April 2018: Request for building permit
June 2018: Detailed design
July 2018: Preparation of documentation for the tender / call for tenders
November 2018: Start of construction
June 2019: Completion of current building
August 2020: Completion of extension building
(Source: Stadtverwaltung Weimar - www.weimar.de) 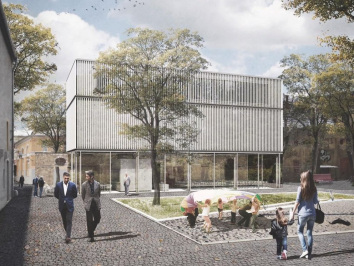 House of the Weimar Republic - Forum for Democracy will be built in Weimar with the support of the federal government’s national urban construction projects program. It will be located directly vis-à-vis the German National Theater and housed in the building currently used for the Bauhaus-Museum. As building contractor, the City of Weimar launched an open design and realization competition that attracted a grand total of 61 architecture firms located throughout Germany and abroad. This made it difficult for the jury to choose just one of the many interesting solutions proposed. First place went to the architecture firm Muffler from Tuttlingen, second to architects Osterwold-Schmidt from Weimar, and third to the Burucker/Barnikol office from Dresden. At the public presentation of the designs, Weimarer Republik e.V. association’s chair Dr. Michael Dreyer, professor at Friedrich-Schiller-Universität Jena, said that “it is a shame that we could not use all of the designs”. He expressed his utmost satisfaction with the results and thanked the City of Weimar for the competition. The association has announced its willingness to manage the operations of the House of the Weimar Republic. Its goal is to turn Weimar’s Theaterplatz into a lively location for exhibitions, political education, and research. (Depiction: architecture firm Muffler) 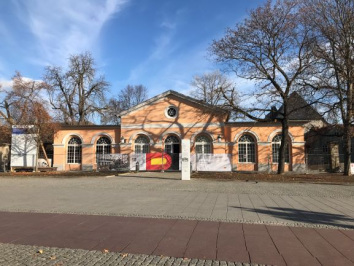 The House of the Weimar Republic project can now become reality. Over the next few years, the German federal government will be contributing 3 million euros from its national urban construction projects program to turn the former carriage house (depot for the court theater) at Theaterplatz, rebuilt by Clemens Wenzeslaus Coudray, into a site commemorating the first German democracy. “Our association was founded in the spring of 2013 to create a space for commemorating and grappling with the highs and lows, with the rise and fall of the Weimar Republic, on the occasion of the centenary of its founding. We have now taken a major step towards achieving this goal,” explains Michael Dreyer, chair of Weimarer Republik e.V., thanking the association’s founding chair Carsten Schneider, Weimar’s municipal administration and city council, as well as all stakeholders in Weimar and at the state and national levels for their support during the application procedure. He highlights the fact that the expert forums and town hall meetings organized by the association were worth the effort, as they provided the foundations for the successful application. According to Dreyer, the focus now is to realize the House of the Weimar Republic project by 2019 by harnessing the joint synergies of all stakeholders interested in partnering with the association, in close coordination with the city of Weimar.

It is absolutely necessary to continue the transparent process of informing and involving citizens that was already conducted while preparing the application. Weimarer Republik e.V., together with the city of Weimar, is currently establishing the groundwork necessary to do so. Detailed updates will be provided here as soon as they are available. In the meantime, you are very welcome to take a closer look at the steps leading up to the current status of the House of the Weimar Republic project and share your thoughts and suggestions with us. 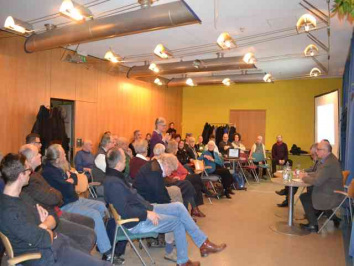 The public deliberations on the contents and location of a “House of the Weimar Republic” in Weimar have been successfully concluded. The lively discussion at the well-attended town hall meeting of 16 March led to the majority of attendees expressing their support for turning the building currently housing the Bauhaus Museum into a site commemorating the first German democracy. A total of six potential locations had been carefully scrutinized beforehand. Several concerns and suggestions were expressed during this process. “We greatly appreciate this feedback and will take it on board going forward,” says Dr. Michael Dreyer, professor at Friedrich-Schiller-Universität Jena and chair of Weimarer Republik e.V. The deliberations have crystallized into an unequivocal recommendation of Theaterplatz as the location for the “House of the Weimar Republic”. The decision now lies with Weimar’s city council, as the democratically legitimate body responsible for this matter. 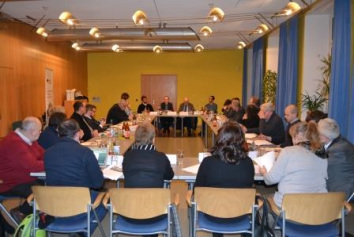 On 17 February 2016, the overwhelming majority of a colloquium of high-profile experts issued a recommendation regarding the location for the House of the Weimar Republic in Weimar. They find that the depot for the court theater (a carriage house rebuilt by Clemens Wenzeslaus Coudray) at Theaterplatz 4, which is currently housing the Bauhaus Museum, is the best choice because of its availability, authenticity, and location. Over 30 local politicians, researchers, exhibition experts, and civic education representatives had discussed a total of five suggested locations in-depth.

Weimarer Republik e.V. is promoting public and transparent procedures throughout these deliberations. Accordingly, it ensures that key documents are shared with the public; all relevant material is available in this forum’s downloads section.

In recent weeks, Weimarer Republik e.V. has been hard at work, looking for a possible name for the memorial site. As part of this process, it has been sifting through the numerous suggestions that arose during the discussions of autumn 2015.

This work has led to the following suggestion: House of the Weimar Republic. Forum for Democracy.

“We find that this title - linked with the subtitle - is a very apt way to describe the House’s role and how we intend to commemorate Germany’s first democracy,” says Dr. Michael Dreyer, chair of the association and professor at Friedrich-Schiller-Universität Jena. He explains that this puts the Weimar Republic, which enjoys name recognition around the world, in the foreground, while also highlighting the close connection to today’s democracy. 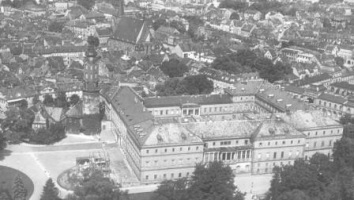 What Is the Purpose of These Public Deliberations?

Together with Weimar’s municipal administration, Weimarer Republik e.V. has launched a process of public discussions on how and where in Weimar an appropriate memorial site commemorating the Weimar Republic as the first German democracy should be built. These deliberations are to be conducted now in order to leave enough time to make sure that historical events can be appropriately commemorated at their original location during the centenary year of 2019. The aim is to work out a broadly coordinated suggestion regarding the contents, name, and location of a house of democracy in Weimar by the spring of 2016. This should then make it possible to organize the project’s funding and implementation.

To ensure the success of the discussions, they should be conducted in a sensible line-up, per topic. The principle here is that form should follow content. This means that the first debates must concern the material to be presented at the memorial site. O.C. clarity has been established in that regard, discussions on the best location for the project can start. Both phases of deliberation will feature on the one hand discussions among experts and on the other public discourse that brings in citizens’ ideas and suggestions. The two communication threads will be interwoven, particularly via the procedure of experts’ deliberations taking place first, with their results used as a basis for the public debate that follows. 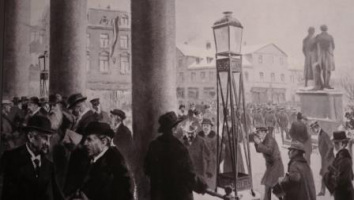 As many citizens and stakeholders as possible should be involved in the process of public deliberations. This makes it necessary to conduct them at several levels, as all citizens interested are then sure to have the opportunity to contribute to the process. The following instruments will be used:

1. Colloquia of experts
2. Public town hall meetings
3. Information included in the official gazette of the City of Weimar
4. Information shared in Weimar’s local media
5. Information and discussion stands in Weimar’s town center
6. An online information platform with a contact form

Hartmut Kaczmarek will be facilitating the discussion process. An experienced journalist, Kaczmarek worked for many years as chief reporter and deputy editor-in-chief of the Thüringische Landeszeitung, a daily published in Weimar. He is currently the spokesman of the Thuringian chapter of the Paritätische Wohlfahrtsverband, a non-profit association of social organizations.

We are currently planning the next events for the project. Updates and event dates will be posted for you here as soon as they are available.

All important documents concerning the deliberations process are available here.

Have your say! We welcome your opinions and suggestions, which you can send us using this contact form.

A project of Weimarer Republik e.V., with generous support from